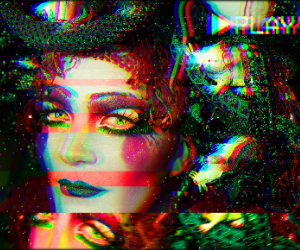 Christmas as calamity—2020 Ibsen Award winner and MacArthur Fellow Taylor Mac and his long-time collaborators, designer Machine Dazzle, Music Director Matt Ray and producers Pomegranate Arts join together to celebrate the holidays in all of their dysfunction. Holiday Sauce…Pandemic! will blend music, film, burlesque and random acts of fabulousness to reframe the songs you love and the holidays you hate. There is more to the holidays than rampant capitalism and gift giving and in Taylor’s world, creativity and imagination are their own spirituality. This holiday season will be bittersweet for so many— Taylor Mac reminds us of the collective power of our chosen families, a message that will be of particular resonance this year when so many have lost so much.

Holiday Sauce…Pandemic! was commissioned by The International Ibsen Festival, The Norwegian Ministry of Culture and The National Theatre of Oslo who present it with additional support from Artpark, ASU Gammage at Arizona State University, Berliner Festspiele, UCLA’s Center for the Art of Performance, Curran-San Francisco, Firstworks/Brown Arts Initiative, The Guthrie Theater, The Hopkins Center for the Arts at Dartmouth, Live Arts Miami, OZ Arts Nashville, Park Avenue Armory, Seattle Theatre Group and On The Boards, Stanford Live at Stanford University, Teatros del Canal Madrid, TO Live, UtahPresents, and Wexner Center of the Arts at the Ohio State University.

VIP Virtual After Party celebrating the LGBTQ+ community and honoring Ari Moore
Immediately following the performance, Artpark and the LGBTQ+ community with emcees Anthony Chase & Javier Bustillos will host a local party via Zoom. During the After Party, we will honor artist Ari Moore, Buffalo’s first prominently out Black trans woman who has established herself as a leader and matriarch of the local movement for decades. Moore owned and operated the Inner City Art Studio before joining the Buffalo Police Department, where she served as an officer for 25 years. Members of the Holiday Sauce community will “stop by” to join the festivities with our honoree in attendance.

Made possible with generous support from: