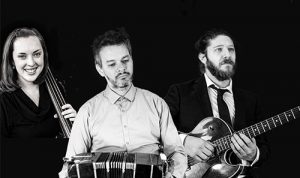 Drew has been a staple of the WNY music scene for the past decade. He currently splits his time between being a full time performer in WNY and NYC and being a musical educator. He has been awarded “Best Jazz Guitarist 2016” from the Buffalo Jazz Polls, 3rd best guitarist in WNY from the the WNY music awards in 2014, the “Jazz Buffalo Mention for Best Guitarist 2015” along with many awards for his bands and projects.

Although prolific as a classical bassist, Megan also enjoys playing outside the genre, and has performed onstage with bands including Chicago, the Fifth Dimension, and Sting as a member of the Magik*Magik Orchestra.  She has previously been a member of an Americana band, and has been known to cover Radiohead on her recitals.